“Only in Korea!” screamed the expat.

Exasperated and frustrated with the daily ups and downs of living abroad, expats take to social media to vent and sympathize with others who understand that “the struggle is real, people!” All too often, these social media groups resemble school yards at recess. There’s noise and chaos. There are cliques and fights. There are star pupils and slackers. There are teachers (aka the admins) who must enforce group rules. There are bullies. And, then, there’s the loner kid sitting in a corner, eating a sandwich, and observing everything. We’ll call this kid “a writer.”

You need to watch out for this writer kid. This kid is trouble. While the obnoxious kid is garnering all the attention yelling at the top of his lungs and hanging upside down from the monkey bars, this writer kid is sitting quietly, taking mental notes, and trying to determine whether you would make an interesting character in her book.

Now that my cover is blown, let’s get to the story, shall we?

Not all expats are kids playing on a school yard, although many expats in Korea do work in schools. The truth is the difference between our online avatars and our real selves is significant. Facebook is fiction. An elaborate, carefully crafted narrative of how we want people to see us. How we want to see ourselves. Rarely, however does that narrative reflect the truth of us, the situation on the ground, i.e., the reality of our lives. For, that truth is much harder to stage manage and produce.

In cyberspace, an image becomes a meme, and then goes viral. Far more than 1000 words are spoken with a single image. If we base the truth of ourselves and others on those images, how far from fact would we go?

A woman posts a photo of another woman’s ass on the subway. The photo is unflattering. The OP looks like a judgemental bitch. But is that the truth of her? Maybe. Maybe not. What you didn’t see is the post that prompted that photo. In context, everything changes. But, we often lack context, especially online. Sometimes, we even lack that context offline.

Nowhere is that more obvious than my experience feeding the homeless.

According to official figures, over 400,000 foreigners live in Korea, with about 250,000 in Seoul itself. As a group, we comprise a tiny percentage (1 to 2 percent) of the Korean population.

Only In Korea (OinK) is a Facebook group for expats living in Korea. Out of context, OinK resembles that playground where expats complain about problems more than they solve them. But, is that the truth?

An admin named De’ja began an “OinK feeds the homeless” initiative. I loved the idea that an online group would take things offline and become a force for good in the world. When I asked De’ja why and if she had done it before, she responded, “Yes, I’m Catholic from Chicago. It’s what we do.”

My involvement started with a trip to Costco on Thursday. With a total stranger named Miki. We met at a subway station and ended up having dinner together. That’s expat life. That’s Seoul. That’s what happens when you are united in a common cause and bond over cheese balls. Yes, really. Cheese balls.

Saturday morning started in Itaewon at a restaurant called Mi Cook Oppa run by an American named James. We made 300 sandwiches and 200 snack bags with rice cookies, seaweed crisps, tangerines, and choco pies. James generously donated buns, bags, cheese, and the space to work. His restaurant is an artist’s studio/restaurant and serves burgers, pizza, and the most amazing kimchi fries!

I forgot to photograph the kimchi fries, but here’s the Mac and Cheese Stuffed Burger. With bacon. Yes, real bacon. Most likely purchased at Costco.

If you’re in Itaewon, check out the place, tucked back behind the mosque. Here’s the map. 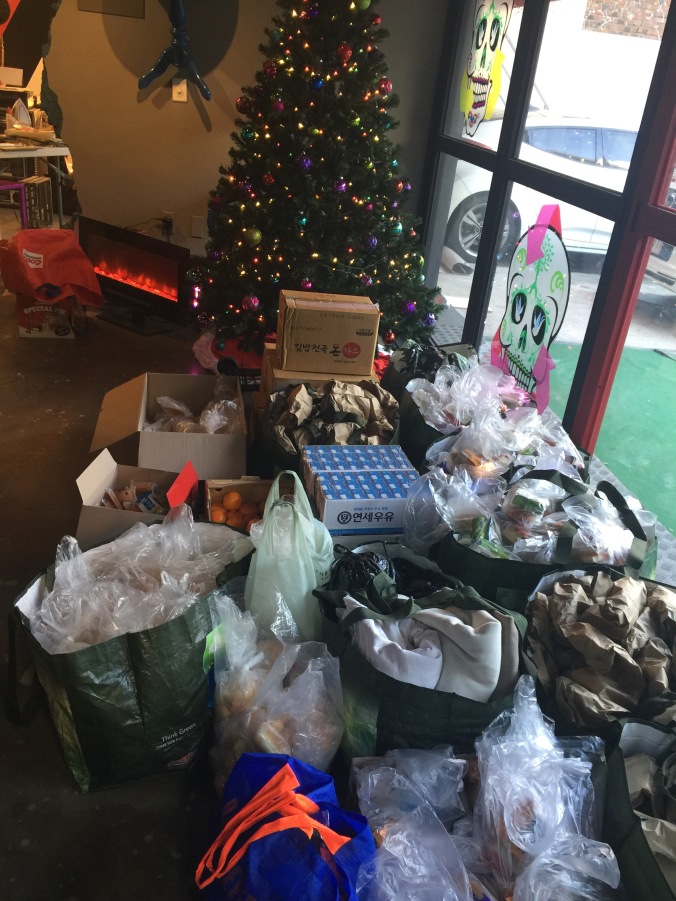 At first, we had about 50 men queue up, but then the crowd swelled. It became difficult to determine who had been served and who hadn’t. We wanted to maximize the beneficiaries and minimize those who jumped the queue for more than one food bag. Another volunteer turned to me.

“How do we decide who gets sandwiches?”

She was struggling with the truth of the situation. She wanted to help as many as possible, but how to do that when we have so many repeat beneficiaries? In our heads, we had crafted a fiction of us handing out sandwiches one by one. One per person. The reality was different. The reality reminded me of a queue in India.

I said, “You can’t control that. These men are coming to us for free food. If they are asking, they must be hungry.”

Could they be drug addicts and alcoholics? Could they be hoarding five sandwiches by running through the line more than once? Sure.

In moments like this, we must understand the cultural meaning behind asking for help, especially for a handout like this. It’s humiliating, demeaning, degrading. In an Asian culture where honor means so much, to be seen receiving charity means these men are less. Less in their own eyes. Less in the eyes of others. Less than human even. At least in the eyes of some.

But, in their eyes, I saw hope and gratitude. I also saw anger and pain.

And, yet, they came.

Why? Because they were hungry. When they jumped the queue, were they cheating the system? Taking advantage of our kind hearts? Maybe.

But, does it matter?

You don’t know whether the man who took two sandwiches has a wife we didn’t see. Or a child. Can you make that judgement? I sure as hell can’t. And, I think we’ve established how judgemental I am. When you add the language barrier, such judgements fall to the ground like ash from a lit cigarette. When the man returned a third time, do I reject him because only one per beneficiary is fair? That’s when you started to reconsider your concept of fair play. Nothing about that man’s situation was fair. Nothing.

For these men, homelessness is a reality. Some in Korea would deny that reality exists. They craft an alternative narrative of Korea, one where everyone has a job, a family, a home. But, the fiction that everyone is employed doesn’t make the reality any less true. Does it?

The next time you rush to judgement, remember this story. I know it will make me think twice about perceptions and expectations. How about you?

2 thoughts on “Only In Korea feeds homeless at Seoul Station ”

This site uses Akismet to reduce spam. Learn how your comment data is processed.