Editor’s note: The writer does not assign stars for reviews. They are arbitrary and subjective anyway. I assure you that the writer would not spend this much time writing a review of a movie she hated.

Tell me if you’ve seen this movie before….

There are these 3 college friends. When the movie opens, your first thought is, “Arre, yaar, these guys are idiots.” Then you see the girl. Because there is always a girl, isn’t there? Naturally, things don’t go well, the lovers are thwarted, and the friends end up standing at a train station that’s supposed to be in UP, but strongly resembles a Mumbai local station. All before the opening credits. That’s when you realize that you’ve guessed the wrong movie name. This movie is Netflix India’s latest release Upstarts. 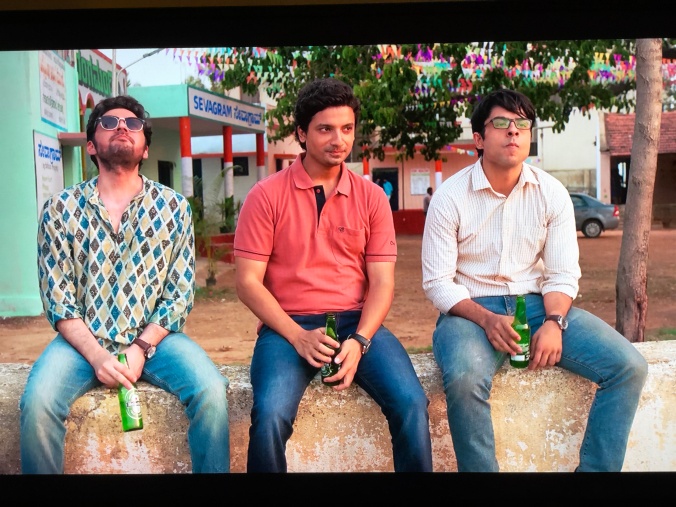 That’s also when you realize there’s something different about this movie. No Bombay. It’s set in Bangalore. No big dance numbers. Although there is the required office party. No romance. Yes, you read that right. And no leading man named Khan.

You, my friend, have stumbled onto independent Hindi cinema, which is just a fancy way of saying the filmmakers have no budget, but they have a lot of heart.

That heart beats in the chests of the movies’s co-writers, Ketan Bhagat and Udai Singh Pawar. Pawar, known for his previous work as an assistant director on Airlift, is making his directorial debut with Upstarts. An IITian who left a lucrative career at Microsoft to pursue his passion, Pawar has conceived this story to show us the passion of startup founders in his local Bangalore. Bhagat is a two-time novelist and first-time screenwriter. He brings to the story his decades of experience crafting enterprise-level software deals and a knack for writing dialogue that’s witty and provocative.

But since this is a Bollywood movie review, we don’t need to discuss the writers any further. Let’s get to the story.

Editor’s note: That’s an unfair generalization about young Indians. All they really want is to get to Kempegowda airport in under two hours.

Our heroes Kapil, Yash, and Vinay decide to change the world when they watch a man in a village die because the necessary medicine wasn’t available. Because they are engineers, they decide to create an app for that: Carry Karo, which is Hindi for really bad UI design. No one likes their app, and it looks like our movie might be over before it starts. But don’t worry. There’s a convenient plot device for that too. A quick redesign, and our startup finally starts to get some customers.

That celebration scene may be based on this video. Or not.

But here we have the movie’s first plot hole the size of an MTR dosa.

Editor’s note: Speaking of dosas, why weren’t there any in the movie, and why the hell was that Pringles can upside down on the table? Do you even product placement?

But back to the plot hole…

Starting a business in India is tough. India has long ranked as one of the worst countries to do business in because even the routine paperwork required can slow the process by months. While those rankings have improved in recent years, Indian bureaucracy remains fairly intractable. How did these 3 random dudes with no real influence manage to just start up without any of that drama?

Leaving aside the bureaucratic hurdles, the first real hurdle startup founders face is cultural. Indian parents spend a lot of time, energy, and money to get these engineers through school and “settled.” When their kids say they want to start a high-risk venture with low likelihood of success, their parents first words are the dreaded “log kya kahenge?” (What will people think?)

Most start-ups fail. In the startup ecosystem, however, Failure (with a capital F) is a feature, not a bug, hard coded into the DNA of every founder. I wanted to see them fail more. I almost wish they had done that eloping service idea and bombed then succeeded with Carry Karo. We get a lot of the characters telling us about startups failing and not a lot of showing us that failure.

And in India failure just isn’t done. This attitude kills many startups before they begin. Makes you wonder how many Flipkarts have died in a family’s 2BHK in Koramangala.

I really wanted to see more of this family drama, and Bhagat knows how to write that well. Instead, we get a Parkinson’s subplot featuring Yash’s father than feels forced and awkward.

And finally we have come to the point in the review where I realize that I haven’t told you anything about the actors or even the characters really.

And I’m not going to either.

Plenty of reviews do that. Upstarts has gotten some fantastic coverage. You should read that here, here, and here, and watch a great interview here.

If you made it this far into the review and are still wondering if this is a Netflix and chill kind of movie: it totally is.

Plot holes aside, the story is original. Mental health, depression, and alcoholism feature here in a way they often don’t in other Hindi movies. From their challenges to securing investors to the technical struggles to existential questions that percolate beneath the surface for 3 men who want to change their country for the better, the cast do a great job of conveying the emotional vulnerability that makes me never want to start my own business in India. I found myself screaming at the screen at one key moment and cursing the writers for putting me through that hell.

Pawar’s realist approach works well in this world. I can’t imagine Katrina Kaif doing a dance number in the middle of the big board room scene. But I bet you can. Get your mind out of the gutter. Besharam!

That word (which means shameless) brings me to my final point about this movie. In the US, the film defaults to the dubbed English version. About 20 minutes into the movie, something felt off about the English. I couldn’t place it until I switched to Hindi with English subtitles. That’s when the movie’s rhythm changed. In the English dubbed version, you lose the nuance of the Hinglish. The English lines in Hinglish serve 3 primary purposes:

A lot gets lost without these verbal cues. So do yourself a favor and watch the movie with the subtitles on.